skip to main | skip to sidebar

has been inactive for more than a year now. Day jobs and other matters kept us from updating the blog of the usual stuff. Yes, we really do miss sharing some the music and the bands that we listen, but it has to take a back seat so that we can focus on some really important matters. The Soundblasters Facebook page is still active and old and new followers are still actively following anything that we post there. Last month Allan Alcantara, our other moderator/contributor has uploaded a 30 minute playlist of ska . Followers and friends were pleased that some old and obscure ska tracks were heard again through Soundblasters. It also proved that Soundblasters is still alive.

Marcelo, Marketing Manager of KATA Philippines asked us if we would try, test and review their new entertainment/Internet gadget that they are launching. I said yes, because this is a good opportunity if we will develop a tech review blog. us with a brand new Kata Box and a Kata controller. After receiving the items, I was a bit surprised because I never thought that Kata Box would be small and handy. You can see the unboxing images below. The Kata Box comes in a beautiful and elegant black . The device feels  pretty solid. It doesn’t feel cheap at all and the Kata Koi logo is a very nice touch. The box comes with a Bluetooth remote control and a power adaptor and a manual. A USB Bluetooth receiver comes with the game controller box and a USB to micro USB cable for charging the game controller. Obviously, the game controller is similar to the Sony Playstation controller with the same buttons and two analog sticks. The package requires an HDMI cable, but unfortunately it doesn’t come with one. Good thing I have a spare HDMI cable with me.

After admiring the looks and feel of the device, setting up was a breeze. Just connect the power cable, the USB Bluetooth receiver and the HDMI cable to their right ports. Turn everything on and begin setup. Boot up took 72 seconds. After the Splash screen, it will let you choose the language and then the wireless setup will show. Just follow the simple prompts for your Wi-Fi connection.  I After that it will lead you to the home screen. The built in applications and each app will have their own sub-menu when you click it. For the TV apps to work, you have to connect first with MegaVPN. As you know American shows have specific country restrictions and what MegaVPN does is it overrides the country restriction and redirects your IP address to another country’s IP address without access restrictions. The package comes with a free 60 day MegaVPN access  which is very nice. Just click on the MegaVPN icon for you to connect. Once connected, you will see a green key icon on the upper left corner of the screen, meaning that you’re good to go.

Just like regular android devices, it will ask you to update certain applications like Google Play, Google Play Games, YouTube, the CBS, FOX and PBS. Once updated you will be able to open the applications and enjoy. What Really got me going was Netflix and The CW. Aziz Ansari’s Netflix shows “Master Of None”, “Walking Dead” episodes”,”Daredevil”, “Wet Hot American Summer”, “Lilyhammer”, “Russel Peters Vs. The World” are all brilliant. “The Flash” and “Arrow” in HD are
nice. Comedy Central, Saturday Night Live, South Park, Robot Chicken, Conan O’ Brien, Jimmy Kimmel, Jon Stewart  and Stephen Colbert can be accessed without any issues.

The Office apps worked as designed. Tried opening word documents using a USB and documents from my DropBox account – all go.  The device settings are easy to understand, video player worked fine when I tried watching the extended version of “The Hobbit: Desolation of Smaug”.  Spotify, Tune In Radio, MX player and music player worked. is a good tool in turning applications off running in the background, but after updating it, the button that lets you turn off those applications disappeared. An application issue obviously. I have the same application on my i4, same issue with Wipeout.

For the game controller and the remote control, if you’re not into game consoles (Xbox or Playstation), using them will give you a hard time at first. And if you’re not patient enough, it will leave you a bit frustrated. I’m not into game consoles and I don’t own one, but am a bit familiar with the control layout and use since I got to play with an Xbox and Playstation. The game controller has a nice weight to it, it's not that heavy and the feel is just like using a Playastation controller. Now, since the device is also used for browsing the internet, the game controller will act as your mouse and keyboard. An android keyboard will show up on the screen when you’re trying to access some apps and you need the left analog stick to highlight a letter or character on the Android keyboard and use the right analog stick or the X button to click on that character. Yes, it will take you some time to type. It took me about an hour to figure out the which button is for what. The good thing is that the buttons and analog sticks are responsive. Same with the remote control. One thing that would make the game controller better is if it would have a crisper, tactile feel of the buttons. The controller is rechargeable using the USB cable that came with it. The remote control is pretty slim with a nice matte finish. If you’re not sold using the game controller for browsing and other internet related activities, you can use a wired mouse and keyboard since the device has 2 USB 2.0 ports. Or better yet, you can use a Bluetooth keyboard and Bluetooth mouse and use the device just like a regular PC.It would also help if the manual comes with some simple instructions on initial MegaVPN setup and what the game controller buttons are for if no mouse or keyboard are present.

Just like any Android device, you can install applications listed in Google Play but take note, some games may not work because some of it are designed for wireless smart devices (smartphones and tablets) which uses motion sensors and accelerometers which your LED TV don’t have. I tried playing a jet simulation game thinking that the game controller will work. The simulator just kept on spinning and spinning, so no go to games requiring those sensors.


Box delivers. a 3 hardware that doesn’t require a contract for you to use and enjoy benefits of converting your regular TV into a smart TV. You don’t need to spend that much to enjoy the benefits of having . But just like any internet device, full enjoyment will depend on your connection speed. If your connection is an entry level plan, you just have to wait until late at night for your speed to compliment the usefulness of the TV applications. For the other apps, no problem.  Would I buy it? Yes. For the complete specification click here.
Posted by skunk and joneighbors at Tuesday, November 17, 2015 No comments:

Hello friends. We will be celebrating our 19th year this August and we would love to celebrate it with you. This August 2nd Saturday, we will be playing 2 sets of ska/rock-steady/reggae at Handuraw Pizza, Sikatuna. Spend your weekend having delicious and affordable pizzas, pastas, cold beer, good music and good friends. The gate is free. All ages. Show starts at 9PM. Spread the word. See you there. 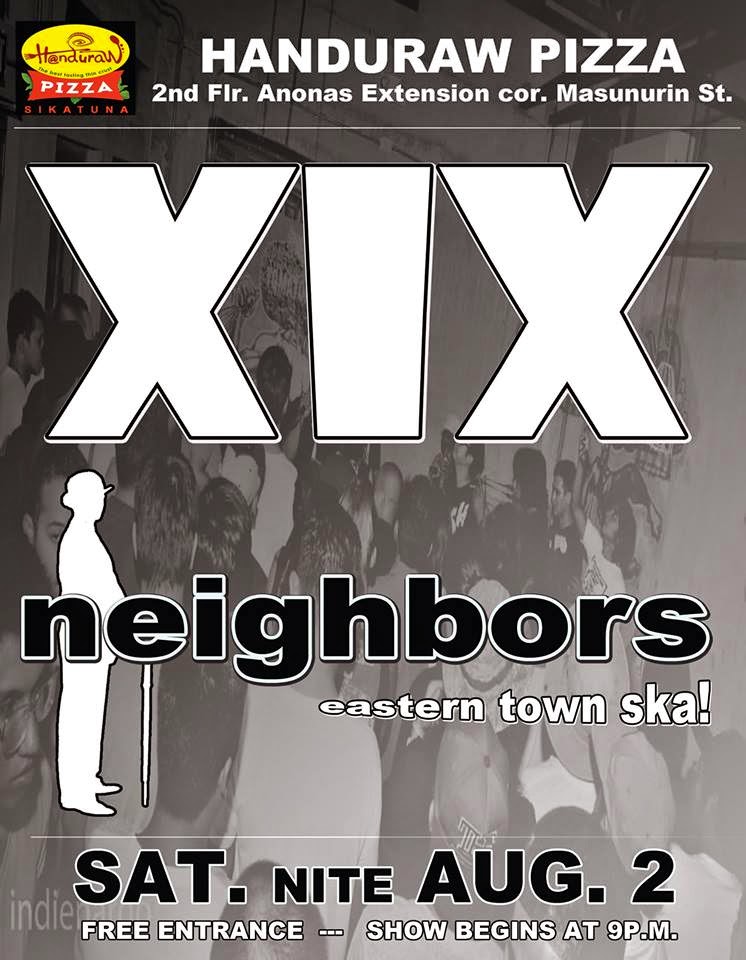 Posted by skunk and joneighbors at Monday, July 21, 2014 No comments:

We have not posted anything new for so long. we have been very busy but we still keep in touch with friends and bands from all over to be featured here. don't worry we wil posting new material s soon.

The EastScooter Boys, The Vespa Club of The Philippines and local Piaggio, Vespa and Aprilla distributor Granstar will give you the 7th Angono Scooter Jamboree. One of the anticipated scooter rally in this part of the world. A brand new custom painted Vespa LX150ie will be raffled plus other scooter gears and minor prizes. it will be held tomorrow May 25th at the Scrapyard Resort. Food, booze, live music and brotherhood will flow. Nyte in Tunesia, The Go Signals and Neighbors will provide live and blasting mod, rock and ska music for everyone. Nuff said! See you there!

Posted by skunk and joneighbors at Friday, May 24, 2013 No comments:

Ending The Year With Style 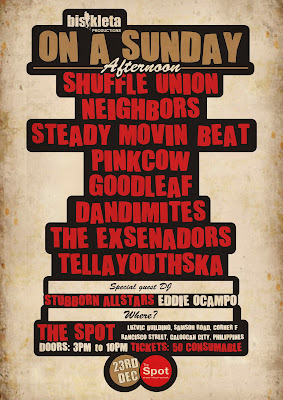 Posted by skunk and joneighbors at Wednesday, December 19, 2012 5 comments:

Discuss and talk everything related about the music we like!

We started this to share ideas and thoughts of the music we like. Ska, Punk, Rock Steady, Soul, Reggae and many more. We upload some music from our own collection for blogging and/or educational purposes with the hope to expose the masses to the power of honest sound. If you like something, keep the flames burning by supporting the artists. Go out, watch them play, and please buy their albums. We put a lot of work into tracking down certain records and/or trading them, and is also why we created this blog; to show gratitude for sharing music that has been sadly out of print, dismissed, rarely heard or hidden in the vaults. Email or send us some of your stuff if you want them featured here. This blog is in no way intended to infringe on copyright or intellectual property. If you want a track taken down, let us know and we will remove it right away.